With Fathers’ Day coming up this Sunday we send best wishes to all fathers and grandfathers and thank you for the critical influence you are in the lives of our young men. If your son doesnt have a father in his life then we know that it is vital that he have other significant males in his life to set the rules on how to behave and navigate life as a male.

Having the right guidance in his life for our young men can’t be underestimated. Adolescence is an important time to lay those foundations, to guide him on the right path to become the fine young men we hope they all become. School provides important role modelling but that has to occur in partnership with parenting that reinforces those messages, the programming if you like , that we are seeking to impart.

Celia Lashlie spoke of the Bridge of Adolescence: 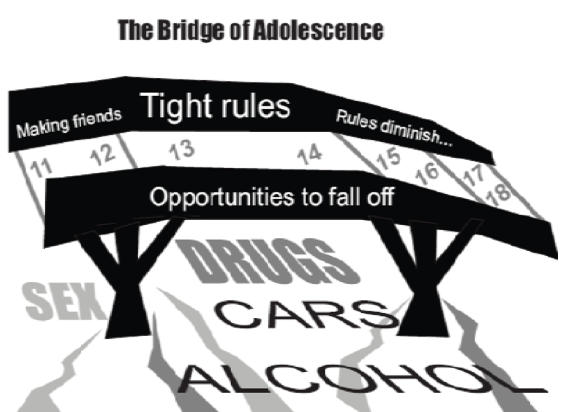 She emphasised that at this age it is important for mothers to step off the bridge and allow fathers to step up and walk their sons over the bridge into manhood. There are so many learnings our sons make from their father where words aren’t actually spoken, where they obeserve the heroes in their lives, where the look from Dad, the raised eyebrow, the crooked finger directing them can speak volumes in a language they understand.

As human beings, we grow up by imitating the behavior of those around us; that’s how we learn to function in the world. If a father is caring and treats people with respect, the young boy will grow up much the same.

If we consider the diagram above we can picture fathers stopping their sons fal linto bad habits at critical points by the appropriate guidance. Are mothers influential? Of course they are but we know that the teenage years are the important time for fathers to step up.

A parenting commentator Michael Grose has some useful suggestions also

This Friday we have our Year 7 Fathers day BBQ as well as it being Jersey Day in honour of Nathan Gremmo and in support of the Donate Life Network. We would encourage all boys, staff and parents to wear their favourite jersey on the day. We look forward to seing our Year 7 Dad’s for breakfast!

In closing. again best wishes to all Dad’s, grandfathers and males who are significant to the young men in our college. Thank you for the enormous formative difference you make.

The efforts inspired by Jack Berne from St John the Baptist Primary School, Freshwater to raise money for drouight relief , the Fiver for a Farmer movement has seen an amazing response all over the country to the movement. Our own college came together and raised in one week over $4000 which was a great outcome in so short a period.

I’ve encouraged the young men of our college many times that Blessed Edmund Rice’s example living today is to place others at our centre, not ourselves; the gospel message of Jesus,  in action. That our young men in very insular and selfish times, reflect on the gospel message of Jesus, who commaded us to loved one another, who placed himself with the poorest and most marginalised of his times, can reflect on this and act with the level of generosity they have, was wonderful to see.

We asked our men to give what they could. $5 was a general minimum but I’m always reminded of the story of the widow’s offering from the Gospel of Mark 12 :41-44:

” Jesus sat down opposite the place where the offerings were put and watched the crowd putting their money into the temple treasury. Many rich people threw in large amounts.  But a poor widow came and put in two very small copper coins, worth only a few cents.

Calling his disciples to him, Jesus said, “Truly I tell you, this poor widow has put more into the treasury than all the others. They all gave out of their wealth; but she, out of her poverty, put in everything—all she had to live on.” “

Many gave much more than the minimum, some less and few, none at all. That always raises questions about whether they could afford it or were they not moved by the appeal at all or had they already given elsewhere. One can never assume and one must never judge. We hope the seed planted in them of the example of Jesus and Blessed Edmund  is growing well.

What was clear was that the community has been moved to respond and our young men outdid themselves. My hope is that they place the same priority in their minds of all the needy in our society as we should; those who live on the street, refugees whether they be those who come by plane, boat or however, the economic battlers, those with health issues whether it be physical or mental or any other sort of affliction.

It was great too to see the boys and staff respond so well to the suggestio of a mufti day and to show their empathy by dressing in a rural theme for the day.

As we move through the year the young men of St.Paul’s and their families have been very generous. We have ongoing needs in our local and international communities that we can respond from but more importantly I beleive is that our young men are putting their learning into action, that they are changed as young people by the giving and that they are moved always in life to keep others at their centre.

A browse through the college Facebook page over the past week has seen a number of aspects of the life of the college that mark us as a great school for young men. It is a place clearly where our young men receive a quality education provided by experienced and accomplished teachers, immersed in current best and emerging practice. It is a holistic education in an inclusive community founded in it’s Catholic traditions in the spirit of Blessed Edmund Rice.

We celebrate what we value is a notion I believe marks a school and we certainly try to recognise the many and varied talents our boys have, both in and out of the classroom, regardless of ability. As I’ve always said its about growth from one point to another and that is where the achievement lies; the notion of Personal Bests.

Our assembly this week showcased a rich tapestry of the life of the college. Our Prima Primum awards, various sport awards and a range of awards connected with the Waseda school visit to the college which concluded yesterday along with the report from our Cambodia Immersion team made for an inspiring experience of the college.

“The Prima Primum Class Award acknowledges students who have been committed to their academic study. The recipient of this award has throughout the term worked with due diligence to achieve his best by always putting his learning first. He has shown a genuine engagement in whole-class, small group and individual activities, completed class tasks and home-study with interest and care, contributed positively to the learning environment and has been consistently organised and prepared for class.”

It was particularly pleasing to see the number of students who were receiving an award for the first time or the first for a significant period of time. They should be very proud of these awards which count towards consideration for the cumulative award at the end of the year. It was also pleasing to see those back for another one, term by term, showing the consistency of effort and attitude which is truly admirable.

A number of boys represented in snow sports over the holiday break on behalf of the college and it was terrific to see the scope and breadth of their involvement.

Our athletes from our Twilight Athletics carnival also were presented with their age championship medals. We further awarded the winner of the carnival which was for the second year in a row, Bourke House.

The past two weeks has seen the college host the Waseda School from Japan. We are very grateful to the families who hosted the boys, the great work doen by our staff Mrs Kibby and Mr Chaney and to the boys who worked as mentor coaches with their Japanese brethren, teaching them English. They in turn coached our boys in Japanese. The product of all this culminated in awards given at Assembly.

Our Cambodia Immersion team presented at assembly a video of the many experiences of the tour and spoke from the heart about the impact the tour has had. Our tradition encourages such a tour as the core business of any school with a spirit of Blessed Edmund Rice who encouraged us to ‘give to the poor in handfuls’, a call to liberation from poverty and hopelessness.

As Bishop Samuel Ruiz Garcia, retired Bishop of Chiapas, the poorest Diocese in Mexico, once famously said: ‘The only question we will have to answer at the end of time is how we have treated the marginalised.’ (with thanks to Dr Wayne Tinsey for this quote)

I challenged the boys though to not see such experiences as disconnected from their daily lives and their call to be the face of Jesus to each other, lest they be considered hypocrites. Jesus did not give us dispensation for some days of the year or some people we don’t like ar for any other reason such as faith, background or even sexuality. We are all equal in the eyes of God.

Reflections on practice, leadership and education.

Finding the next educational horizon

"For the perfect flâneur, for the passionate observer, it's an immense pleasure to take up residence in multiplicity, in whatever is seething, moving, evanescent and infinite: you're not at home, but you feel at home everywhere, you're at the centre of everything yet you remain hidden from everybody." Baudelaire

thoughts and ideas on coaching and leading teacher learning

A collection of my PBL projects to spark conversations and develop new ideas for your subject and context.

The latest news on WordPress.com and the WordPress community.